Can Teething Cause Vomiting? 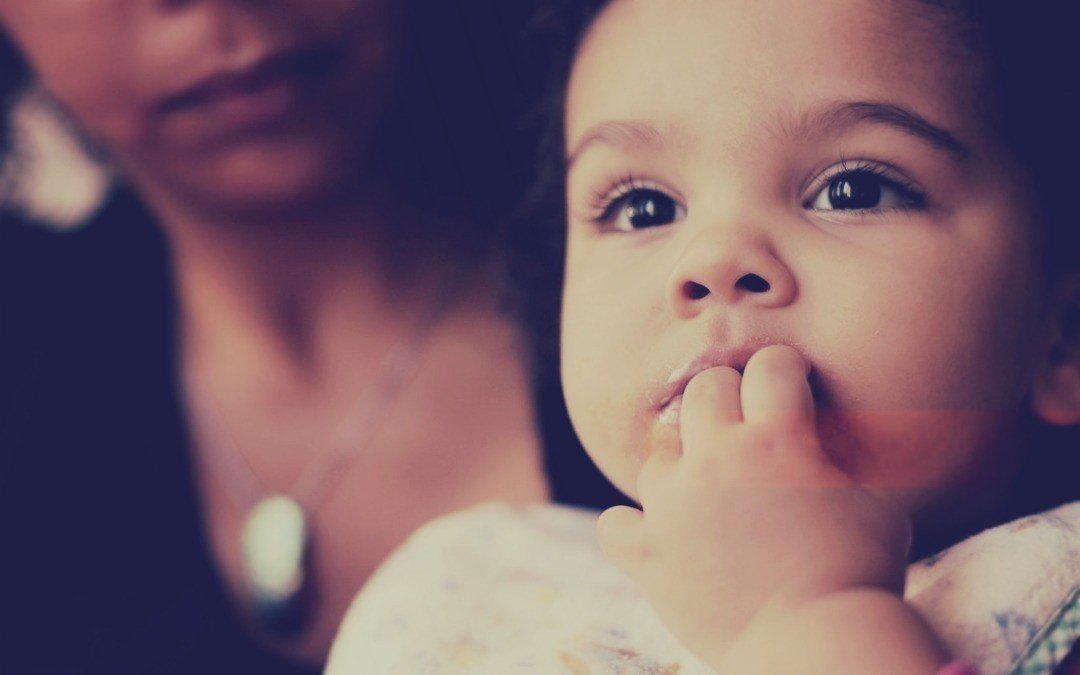 Article at a Glance:

It has been famously said, “Teething only produces teeth.” And yet, still to this day, parents are misinformed about the signs and symptoms associated with baby teething. I have met several parents that believe fever, vomiting, and diarrhea are symptoms of teething.

While it is typical for a teething baby to experience pain and discomfort, followed by excessive drooling, chewing, and biting, symptoms such as fever and vomiting are NOT related to teething.

If your baby has started actively teething with the regularly associated teething symptoms but is also suffering from vomiting, there is a 98% chance this is unrelated to their teething process. In most cases, vomiting is caused by an illness such as a virus and not teething.

The Journal of the American Academy of Pediatrics conducted a study [1] that asked parents of 125 teething babies to record the presence or absence of 18 different symptoms twice per day for each tooth eruption.

The study listed the baby teething period per tooth as 4 days before a tooth erupted through the gums, eruption day, and 3 days after the tooth appeared. This study helped resolve the question of whether teething causes vomiting in toddlers and infants.

The results showed that 35% of teething infants had no symptoms during the 8-day teething period as defined by the study.

In this study, a fever during teething was not common; however, some infants did have a slight increase in temperature (less than 102 degrees), but only prior to and on the day of the tooth actually erupting.

Vomiting was not a teething symptom that parents reported back at all, which further supports the theory that teething does not cause vomiting.

The doctors involved in the study used the opportunity to remind parents that abnormal “supposed symptoms” of teething include fever over 102⁰F, vomiting, diarrhea, decreased urine, cough, or any other symptoms that cause babies to act really sick or not like themselves.

If these symptoms appear in your child, they should be evaluated by a doctor and not simply written off as a mysterious teething symptom.

When Teething CAN Cause Vomiting In Infants

Do not get vomiting confused with spitting up. Spitting up is induced by the inability of a muscle at the top of the stomach to close properly. This is also known as gastroesophageal reflux [2]. It is harmless and ceases by the time a child reaches their 1st year.

Vomiting, however, is typically more forceful and usually caused by a viral or bacterial infection. Pay close attention to the symptoms and signs that your teething child may exhibit to rule out any health concerns.

Among the list of symptoms associated with baby teething, you are likely to see swollen gums and excessive drooling. Sometimes, excessive drooling could be a potential cause for a teething baby’s vomiting or rash.

When saliva production is increased during teething, the majority of it is swallowed. Of course, the rest soaks your baby’s clothing, your shoulder, and your furniture.

Because saliva contains digestive enzymes that help break down food, swallowing too much saliva may cause an upset stomach that results in vomiting in some babies.

The more probable explanation for vomiting during teething is the presence of bacteria or a virus.

It is well known that teething causes discomfort. Babies and toddlers alike tend to try and ease their discomfort by gnawing on any object in reach. Random objects not intended for mouthing, and even their own hands, may be teeming with bacteria that cause illness, vomiting, and diarrhea.

Look for other symptoms of a viral infection, such as a fever or extreme loss of appetite. While some sources online link teething and vomiting, it is best to consult a medical professional if you notice your child vomiting for over 24 hours.

If your doctor rules out a more severe illness, he or she may recommend an over-the-counter (OTC) product to help alleviate pain and settle your child from crying and discomfort.

Although advice from a doctor is justifiable, it is important as parents, first and foremost, to educate ourselves on the potential risks associated with OTC medications and follow our own judgments.

Be aware that the FDA warns against using OTC topical creams, gels, and homeopathic teething tablets to relieve baby teething symptoms. Products that contain benzocaine, which is used as a numbing agent for sore gums, can lead to serious, and sometimes fatal, conditions.

A study in 2017 [3] looked at what pharmacists were recommending for symptoms of teething in infants. At least 50.5% of pharmacists that were surveyed had recommended to primarily utilize a natural remedy to soothe infant teething symptoms. However, at least 63% of all pharmacists would erroneously prescribe a medication containing benzocaine.

Seek advice from a medical professional

obtaining a second opinion for reassurance.

Know the ingredients in your baby's medication

The FDA advises against certain ingredients such as

Know the proper dosage to administer to your child

Overdosing your child could lead to harmful,

Beat The Vomit To The Punch

The best way to prevent any illness and out-of-the-ordinary symptoms for your baby is to educate yourself and become aware of the baby teething process.

Remain diligent in observing your baby and the changes that they undergo. Having a clear understanding of the baby teething process can help ease the stress from yourself and help your baby toward a smooth teething experience.

How Do I Know When My Baby Starts Teething?

A baby’s first tooth eruption comes in around 4-6 months, however, this will vary for every child. Every teething experience is different and unique. Do not be alarmed if your child doesn’t fit within the bounds of this teething time frame. Some children I have met didn’t have their first tooth eruption until they were 13 months old.

As I have said, teething will vary. So don’t be wary.

Whether you are a first-time parent, or this is your 2nd or 3rd, the best way to know when your baby starts teething is through observation. Pay attention to any changes in their activities or behaviors.

What Are Teething Signs and Symptoms I Should Look For?

If there is one thing we are sure of, it would be the fussiness babies experience when they start teething. This is one painful milestone that they must endure. A great one, but a painful one. Along with fussiness or irritability, babies tend to excessively drool or start to chew/gnaw on whatever they can get their hands on.

And remember along with vomiting, fever and diarrhea are not symptoms of teething.

Baby Hygiene is The Best Form of Prevention

This one should seem self-explanatory and its also the reason why the human race has been able to exist for centuries. Keeping up on our baby’s hygiene is the best way to prevent their susceptibility to bacterial or viral infections.

As your baby begins teething, making sure that objects they use for teething relief are sterilized with baby-friendly soap or hot water. Hot water should reach between temperatures of 140-160⁰F (60-71⁰C).

Did you know that baby teeth are also susceptible to dental cavities? Using a baby-approved toothbrush can not only provide relief, but also help your child practice oral hygiene. Gotta start ’em when they’re young!

Let Food Be Thy Baby’s Medicine

To build a strong immune system, it is imperative to make sure your child is receiving adequate nutrients for optimal growth and development.

Although some mothers are opposed to breastfeeding, and many for personal reasons, breast milk is nature’s perfect source of nutrients. It contains all of the essential vitamins, minerals, and enzymes that a baby needs to develop a strong digestive system. Even most baby formulas cannot mimic this perfection created by mother nature herself.

If you are a parent opposed to breastfeeding, make sure that a food source you choose is organic and sustainably sourced. Food production practices are transferred into our food and fed to our bodies. If a child is consuming milk that has been processed from a cow injected with hormones or antibiotics, there are residual chemicals that are contained in that milk. A child’s health is vulnerable to these chemicals.

Children should strictly consume breastmilk or formula until around 6 months, or when their first tooth erupts. However, a child younger than 4 months should never consume solid foods as their digestive system has not fully developed.

Once they are ready for soft or solid foods, try practicing baby-led weaning which prepares your child for autonomy.

Is It Time For a Baby Check-up?

Most pediatric dentists recommend that children visit the dentist office by their 12th month.

By this time, several of their baby teeth have erupted. If your child has not started teething, this would also be a great time to learn about your child’s oral health and what foods or vitamins they can take to help fortify their bodies for this inevitable milestone. 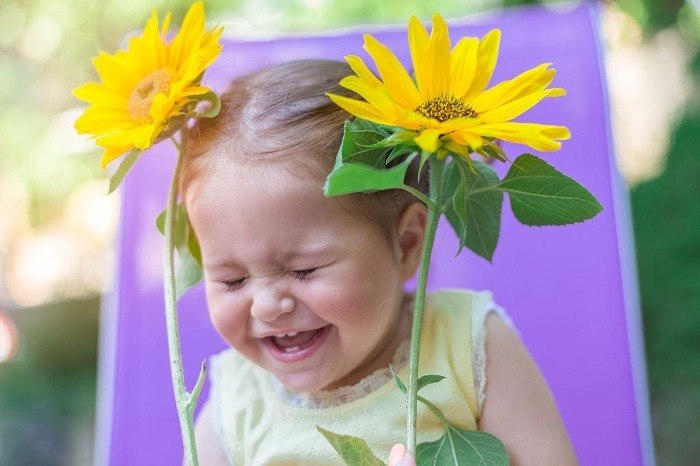 A Natural Remedy is The Best Baby Teething Remedy

Now that you have been briefed with information about the baby teething process and ways of preventing your baby from the abominable vomit, we gotta talk natural teething remedies.

Most typical teething symptoms last a few days before and after the tooth eruption [4], so be sure to pay close attention to your baby and know what symptoms are considered “normal” for them. There are many ways of knowing how to soothe a teething baby.

Often, the discomfort and irritability associated with teething can be easily managed at home with natural teething remedies. Studies have shown gum-rubbing and cuddle therapy as the best remedies to soothe your teething infant [5].

Kute Keiki offers teething solutions that are hygienic, hypoallergenic, and resistant to bacteria. These food grade silicone teething toys are easy to clean, can go into the refrigerator, or attach to car seats and strollers for instant relief for your baby on the go.

[2] Baird et al. Diagnosis and Treatment of Gastroesophageal Reflux in Infants and Children.